> PUBLISHED IN NOVEMBER 2016 BY PROGRESSIVE PRESS <

The New World Order In Action

Vol. 1: Globalization, the Brexit Revolution and the "Left" 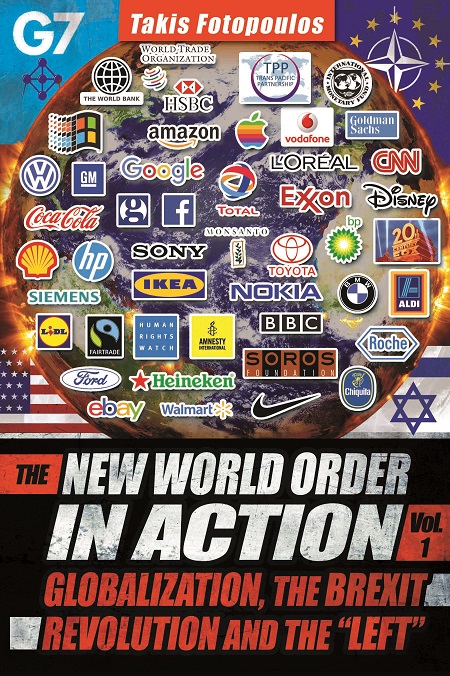 “This latest blog is a review of what I consider the most important book to be published this year, by the Greek socialist Takis Fotopoulos.”

“Once again, with his new magisterial book, The New World Order in Action, Takis Fotopoulos proves himself to be one of the most comprehensive critics of global capitalism and its fatally flawed system logic. His analysis of the "New World Order" —as a hierarchical, society and earth-destroying transnational institutional network, rather than a mysterious conspiratorial cabal— is essential for understanding the current crises that threaten all life on this planet, and for moving beyond them. Fotopoulos remains au currant and as incisive and relevant as ever.”

“The New World Order in Action ranks with Karl Polanyi’s The Great Transformation as essential reading for understanding the evolution of our dominant institutions.”

“I would like to express my total agreement with the central thesis of the book that it was the intellectual failure of the Left to grasp the real significance of neoliberal globalization that led to its political bankruptcy. The inevitable consequence was the rise of a neo-nationalist movement in Europe, which is embraced by most of the victims of globalization, particularly the working class that used to support the Left.”

Arran Gare, Professor in the Faculty of Life and Social Sciences

at Swinburne University of Technology in Melbourne, Australia

“Takis Fotopoulos is among the most important voices on the left today. We ignore his formidable analysis of contemporary geopolitics in The New World in Action at our own peril. A must read for all those who are seeking ways to challenge the terror of neoliberal capitalism.”

“Takis Fotopoulos is one of the most expansive, tireless militants of the new global Left, reinvigorating and carrying forward the neglected currents of emancipatory socialism into a 21st century in desperate need of them.”

School of Social and Cultural Studies,

This major three-volume project aims to cover all aspects of the New World Order (NWO) of neoliberal globalization, which is shown to be not simply a conspiracy, nor the product of the actions of some shock doctors. In fact, both the military and the economic violence used against the peoples in the Middle East and Europe, with millions of people as its victims, aimed at the full integration of every country in the world into this new order, which implied the phasing out of their economic and national sovereignty.

The rise of the NWO and the role of the Transnational Elite, that is, the network of the economic and political elites mainly based in G7 countries which administers it, are examined in the first volume. Furthermore, the mythology used by the elites about sovereignty and the multipolar world are considered, as well as the corresponding mythology of the globalist Left , i.e. the present Left which is fully integrated into the new order, in relation to its consequent political bankruptcy. It is shown that it was this failure of the Left, which is the ultimate cause of the rise of a neo-nationalist movement in Europe but also in USA, which, in turn, was embraced by most of the victims of globalization, particularly the working class, which used to support the Left.

The first volume concludes with the imperative need for a struggle for national as well as social liberation, whose aim would be the creation of a new international community of sovereign and self-reliant peoples. This would be also the precondition for any systemic change that would lead to a new form of internationalism inspired by the principles of solidarity and mutual aid, rather than the catastrophic principles of competitiveness and profit-making, as at present.

In the following volumes it will be shown how the use of economic and military violence in the Middle East and Europe was successfully used for the full integration into the NWO of Iraq, Libya, Syria, as well as Ukraine and Greece.

Takis Fotopoulos is a political philosopher and editor of Society & Nature/Democracy and Nature/The International Journal of Inclusive Democracy. He is noted for his synthesis of classical democracy with libertarian socialism and the radical currents in the new social movements. He called this synthesis “Inclusive Democracy” in his seminal work Towards An Inclusive Democracy (London & New York: Cassell, 1997) which has been translated into several languages including Chinese, French, German, Spanish, Italian and Greek. He is also the author of many books and contributions to other books in several languages and of over 2,000 articles.

1. The rise of the New World Order

2. The role of the Transnational Elite

3. The phasing out of national sovereignty in the NWO and the rise of neo-nationalism

4. The myth of national sovereignty

5. The myth of the multipolar world and the BRICS

6. The rise of the globalist  ‘Left’ in the NWO and its myths

7. The pro-EU propaganda about “democratizing” Europe and the NWO

9. The Brexit revolution in the USA

10. The imperative need for a shift of strategy in the struggle for self-determination

12. From the NWO to a Democratic Community of Sovereign Nations